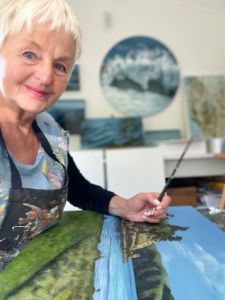 ANN SKELLY BAHons
I’m a Waiheke Island Artist working full time from my small garden studio. I paint mainly in acrylics on board and canvas, sometimes driftwood…..Nature is my Muse
Visitors to the studio are very welcome but please call ahead or email first. I sell many of my pieces from my studio and from The ‘Waiheke Room’ within the Upcycle Re-Design store in Oneroa, Waiheke Island.

Artists statement: Together we face the inevitability of a new world…. Let’s make it a positive and joyous one
For Buyers
Browse Art
Your Orders
Buyer FAQ