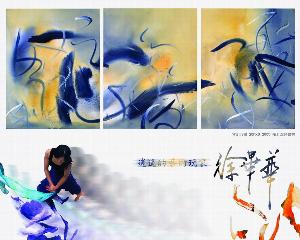 Jessica Pi-Hua Hsu’s parents come from Fujien China, but she was born in Formosa, Taiwan .Hsu’s arts have multiple cultural visions that reflect both Eastern and Western aesthetic vigor, as well as traditional and contemporary sustenance. Hsu’s uninhibited creativity is inspired by nature, music, dance, flower arrangement art , classical culture ,and meditation . Her life philosophy and creative style which emphasizes "reduction" provides pure energy to her "literary abstract paintings" which are grand, carefree, and spacious.

Hsu’s abstract art uses western media, and daily life elements but has a unique oriental calligraphic style while the tone of her work possesses a vivid spirit, blending minimalism and the abstract with cubism and color fields. Her works express life’s magnanimity, chi, power, strength, sweetness, and are full of woman’s wisdom and philosophical thought.
Hsu’s works are shown in many major international exhibitions in Paris, New York, Tokyo, Seoul, Beijing, Shanghai, London, Belgium and Taipei. Her paintings, cross-media artwork, and video media are highly valued and collected all over the world.

Jessica Pi-hua Hsu is one of the few extremely vigorous professional artists in Taiwan art circles.Recently her artwork is getting sparkling in China ,and even in New York. She specializes in mixed media creations and painting, cooperatively crossing over into different fields as well as fashion and art,impromptu dancing and painting,doing Chinese flower arrangement art research, writing . In over twenty years of art creations, her unique humanistic thought has created a visual feeling and an image of heart and soul that both startles and attracts people at first sight.

From her first art show in 1982 Jessica began studying Lao-tzu’s and Chong-tzu’s philosophy of non-active contemplation of nature for her art. In the later 80’s to the early 90’s she went abroad to study in other countries as well as to aggressively explore western culture and aesthetics. In 1993, she returned to Taipei and lived in the suburban mountain area of Taipei where she rethought Oriental humanism and concepts. This time she inserted Buddhism and Chinese floral arrangement as a new element in her artistic creation. Shaped and cultivated under such diverse cultural influences she brought forth a new personal strong and bright character in her art. She won a prize for new artists and the Asia Fine Arts special prize. Her work was selected by a French salon and exhibited in the Grand Palais, Paris; she also won a fine arts medal from the Association of Arts and Literature.

Although she is a female artist, the bright colors, many levels of space and full vigor of Chinese calligraphic lines are the result of her practice of Buddhism. Her creative style is both soft and strong. When seen from an artistic “grand view,” she has “magnanimity” that does not lack “leisure.” Nevertheless when seen from a close perspective, she has artistic “fineness” that does not lose its “carefree freedom.” She maintains western minimalism and color fields while she mixes Chinese calligraphic art and the tone of the work with a vivid spirit. She plays between the abstract and figurative.

Within all these years Jessica has “played amidst art.” In 1998 she produced “Tender Feeling Installed” that used decorative art and created a soft pad to invite the audience to interact with the artwork. In this way, she showed that artwork cannot only hang directly on the wall but also can be a pillow to be thrown, rubbed and hugged. In 2001, she crossed fields and cooperated with the choreographer Liu Shao-lu in “Dancing with Painting,” which combined the voice, body, atmosphere and breadth. In 2003, Jessica faced a massive stretch of cloth as her canvas. She moved along it and with ‘chi’ painted and splashed the colors spontaneously making a cloth “painting.” The designer Lin Guo-ji restructured cut and tailored cubist art clothes like sculpture from it, giving us an entirely new visual experience. The above fully show how she plays amidst different artistic regions with a relaxed, vivid temperament. Some of her works are reserved and retiring while others jump and actively move; this makes us rub our eyes and take a good look.

●Jessica pi-hua Hsu is sensational in her presentation as well as sensuous in her expression…
－－－Curator Tung Wu
Museum of fine arts in Boston,U.S.A.

●Jessica pi-hua Hsu has succeeded in conciliating this century-old heritage with the help of her profound sensbility,symbiose which appears to be translating in complete freedom between the Painter and Nature, Energy and Contemplation,the Orient and Occident.
－－－Nuncia Pianelli
President Forarts International Paris

●She maintains western minimalism and color fields while she mixes Chinese calligraphic art and the tone of the work with a vivid spirit; she plays between the abstract and realistic. Through this she expresses the human body, heart, spirit (‘chi’), soul and harmony in a comprehensive universal nature that is playfully done to create art.
－－－Jerome F.keating Ph.D.
Professor of Taipei University